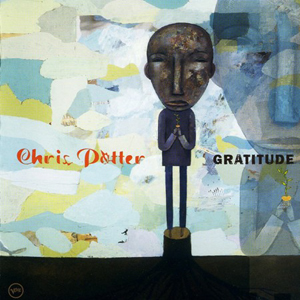 Today’s transcription is the modern tenor giant Chris Potter’s tribute to 60s tenor giant John Coltrane. “The Source” comes from his album Gratitude, which is loaded with dedications to Potter’s heroes. This is the first of a few tracks I plan to pick from this record.

Its a blues, more or less…though cleverly modified in a distinctively bright style. The head shows demonstrates all the quirks of Potter’s writing:

The head is a simple, riff-based tune like the classic blues heads of Coltrane’s era. Coltrane Plays the Blues has a lot of tunes that must’ve influenced this track. In particular, the track “Mr. Day” is very similar…the 11 chords and the 4, b3 turnaround are pretty much identical to the blowing section of Potter’s tune.

I was drawn to Chris Potter’s playing instantly for his clarity of sound and the seemingly impossible lines he throws off with ease. But beyond his chops, there’s a profound logic in each and every line he plays. The lines naturally evolve from each other. The rhythmic motifs are carefully explored. No note ever feels wasted. And then there’s his HUGE ears…in every performance I’ve heard, there’s always a moment when the interaction with the band will go way beyond just listening. An almost psychic response…

Man…can you hear the jealously pouring out of your monitor?

As Potter is one of the most virtuosic modern saxophonists, its little surprise that the technique required to perform this solo is high. He pops out altissimo C#’s with seemingly little effort, and runs bebop-inspired licks in and out of that range with a fluidity you don’t often hear up there. Then there’s the tremendous grace every line is executed with. To truly get the flavor of this solo, play it while matching his time precisely. You’re not going to find a cleaner performance anywhere – one of Potter’s hallmarks.

Ok…so let’s look at some of the best parts.

Early on in the solo, starting bar 65, there’s a 5ths lick that Potter develops for the next chorus, and then keeps coming back mutated into 4ths or rhythmically evolved. The most interesting developments begin and end (F). A nice side-effect of these 5ths stacks is the somewhat triadic sound against the chords with it…a light polytonality, or at least a strong emphasis of the 11 flavor of the progression. It also lends a really fresh, intervallic openness to his line.

In bars 89 to 92, you’ll find my favorite moment of the whole performance…an enclosure lick from hell. Its one of those lines that’s just so slick, it all but requires close analysis and 12-key practice.

Notice how each strong beat finds a chord tone wrapped in chromatics? I love the twisty sequence at the end as well…in fact, that moment is the reason I selected this solo. Sometimes it’s just not fair. 🙂