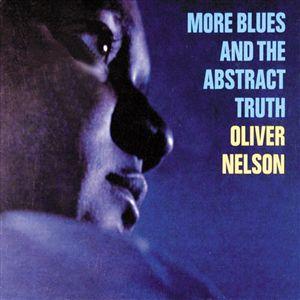 It’s my birthday today, but you get the present! Here’s a Phil Woods transcription from Oliver Nelson’s More Blues and the Abstract Truth.

Phil Woods is possibly the greatest living bebop saxophonist, and the definitive disciple of Charlie Parker in my book. He has the licks no doubt, but what really matters is that his sense of phrasing is so elastic and deeply informed by the blues.

Many players, in an effort to embed bebop into their psyche, run countless patterns and drills ultimately sounding like a band-in-the-box solo. They’re missing that Bird was so loose and more than a little abstract in his sounding of the changes. It wasn’t merely about “insert lick A into slot B”…there was a natural flowing of ideas that floated over the chords.

Phil Woods found a way to emulate this aspect of Bird above all else. Woods has the sheer virtuosity and the gigantic bebop vocabulary, but its the phrasing and playfulness that give Woods the reckless abandon admired by those lucky ones who saw Bird at the height of his powers.

Today’s solo transcription paints a broader picture of Woods’ skill and musicianship. Here, we have him playing the blues…and not just any blues, but a slow 12/8 groover with lots of space and time to play around the edges. The changes are about as typical a blues you can find. The classic Blues form opens the door wide for Woods to break out the gutbucket growls, 40s R&B licks and smeary bends giving his performance that classic sense of soul drenched in the blues of Kansas City. You won’t find many of the dazzling bebop lines Woods is more famous for (though he sneaks in a few), but you’ll find tons of fresh-but-familar blues licks, delivered with fire and passion.

The third chorus (C) is the part that led me to grab the solo. It begins with a hip, textbook use of sounding 3rds and 7ths. You could give it to students as a demonstration that those intervals alone are all it takes to sound a chord, as its driving and soulful, but at the same time, simple and developed. If that wasn’t enough, it all comes together in bar 43 (the D7 in the 7th bar) as he develops the 2-note intervallic idea by expanding it to a major 7th, hitting all the money notes on each change. I mean, dig that Bb to A on E-7, followed by the C# to C on the A7, and then grinding out that deliciously modern sounding #9 in the 11th bar! Its nonstop ear-candy…you know…the kind with the creamy filling.

Measure 54 in chorus (D) is the other highlight for me. Its a classic theory trick used all the way back in Louis Armstrong’s day…instead of playing the IV chord for bars 5 and 6, play the IV for bar 5 and then play a IV-7 in bar 6. It gives you an extra chromatic guide tone that sounds very slick. Here, Woods pushes that idea about as far as it can go by sounding a double-time run over what looks like a G-7 C7b9 progression. It gives you a really juicy new pathway back to D7.

There’s lots of other gems in here, but you can discover those for yourself. Just make sure to line it up with Woods’ original performance so you can catch the nuances that are impossible to put on paper…and there are a ton in a performance like this.