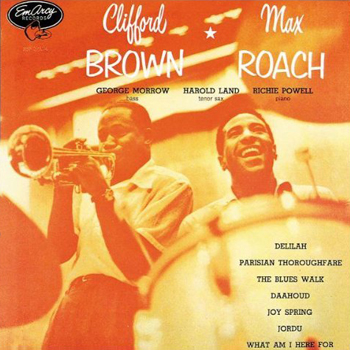 There was a point, while I was at New England, where I became aware that I was playing the same clichés that all sax players play, all the time. This became really obvious as tempos increased. Think about the last time you played an up-tempo bebop tune. Did you find yourself playing a great deal of vocabulary that had been “rehearsed”? I often do – especially on the less familiar tunes. Even worse for me, these lines are some of the most common “sax licks” out there…no, not the David Baker bebop lick…but I sure play a lot of ascending arpeggios…

Well, there are a lot of paths to break out of this sort of thing, but one of the more useful ones for me, has been transcribing the solos of non-sax players. In particular, I love guitarists and trumpet players, but a great solo is a great solo.

Around a year ago, a student of mine was slaving away at Clifford Brown’s “Joy Spring” (from Clifford Brown & Max Roach). That’s a real masterpiece of his, and the student was struggling with the infamous (and incredibly cool) 1st-chorus bridge. While helping overcome some of that, I remembered my excitement for this particular solo when I first heard it. Its filled with perfect bebop phrases with less of the common idiomatic lines associated with Charlie Parker’s enormous shadow. In short, Clifford’s solo reminded me that bebop could be played without quoting Bird every other bar.

So in honor of Brownie, and the efforts of that particular student, here’s my completed take on “Joy Spring”.

I had a conversation with some local pros, and being a shameless self promoter :), I mentioned these transcriptions. In particular, since I was talking to some trumpet players at the time, I thought they’d get a kick out of a sax-player picking one of the great trumpet players. I was wrong. Bluntly, I was told by two of them that Brownie had already been completely transcribed and archived. It was even suggested that I shouldn’t bother, and go do someone else’s solos. Clearly, they misunderstood my intentions.

Transcribing is about absorbing the ideas and influence of players you find appealing. Despite me writing these down when I’m finished, this is about the process, not the resulting sheet music.

Here’s my process in a nutshell: