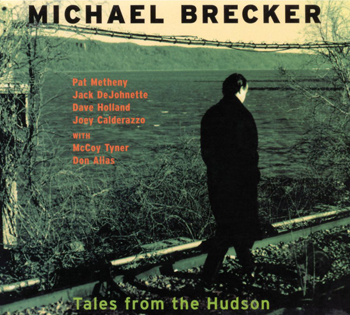 Michael Brecker and I have a long, rich history…not the person himself (God rest his soul) unfortunately, but his recordings for sure. Michael’s records brought me into Jazz, and I had the pleasure of meeting him a few times, which were wonderful moments for me, and I’m sure quite uneventful for him, me being just another in his legion of fans.

You see, when I was just cutting my teeth on Jazz in the early 90s, I found a cassette tape of Brecker’s recording Now You See It, Now You Don’t. Saxophone monster (and fellow Bulldog) Josh Cook gave it to me in while I was in High School, which I had listened to and then dropped into a box of tapes. I didn’t get it at the time. I was still freaking out over Soundgarden and Pearl Jam and raiding my parents’ closet for Flannel shirts.

A year later, I found my way back to the tape. I had my wisdom teeth out…all 4 cracked in my gums while being pulled. To compensate, the dentist hit me with a blast of anesthesia that had me delirious for almost a week. So in that “enlightened” mental state, I lay in my bed, zoning out. To break the silence, I grabbed a random tape from a box next to me, tossed it in the deck, and was blown away by what I heard. Incredible virtuosity, exotic harmonies, and that incredible sound! I was hooked. Jazz, and Brecker were in my life for better or worse.

So Michael Brecker became my guide into the world of jazz…a hell of a way to start if you ask me. Ridiculous chops, tremendous harmonic vocabulary, and a body of work larger than most players could dream of…now mine for browsing and exploring. Now, even though I’ve moved on to other players and studied much more of the music’s history, Brecker has remained a touchstone for me.

So this week’s transcription (in honor of his passing, 4 years ago yesterday) is one I did back then…circa 1998 while in Dave Schmidt’s Improvisation class at Glendale Community College. It was only the 2nd solo I ever learned, and man did I push myself with this one. I’ve since gone back and revised this a few times, finding some wrong notes and rhythms here and there, and I took the time to redo the chords I originally wrote…I had the bass notes, but the chord qualities were all wonky.

I gave an earlier version to Eric Dannewitz to publish over at his site Jazz-sax.com, and I’ve seen this floating around online on several sites that collect piles of transcriptions. Well, forget about those versions. This is the final revision. Version 2.0 if you will. Far more accurate and as clean as I can notate it.

This is a hell of a solo. Blues-inspired lines, pentatonics, melodic minor modes, and hard-edged R&B phrasing, all in the context of a minor blues-influenced form written by Joey Calderazzo. While there’s really a lot that could be said of this one, I tend to focus on just a couple things throughout.