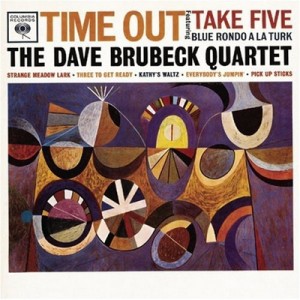 Here’s a very famous solo from Paul Desmond, being played with Dave Brubeck. I know this one is a cliche, and that there’s many purists who scoff at the idea of this tune, but I love Desmond and had this solo in my archives, so why not? Right?

I actually picked this one years ago for the Arizona School for the Arts Showcase event (our MEGA, end-of-the-year concert). Our pit orchestra played this behind the Ballet. The arrangement we purchased left a lot to be desired so I rewrote it and added a Basie-esque harmonization of Desmond’s solo to give the sax players something interesting to do.

The solo is very short, and as this album really represented jazz’s first significant adventure into odd meter, it doesn’t stretch very far rhythmically. Much more interesting is Desmond’s use of articulation and sequence.

Desmond doesn’t follow the “traditional” bebop articulation pattern of tonguing primarily off beats and accented notes. Instead, he appears to ad-lib his articulations based on the shape of his line. Note the opening phrase of the head. He semi-ghosts the first two notes, accents the 3rd and possibly the fourth. The chromatic part of the lick has a slur from the downbeat to a dramatic staccato, and then all the remaining notes are tongued. This gives his line a dramatic and very unique percussiveness that, to my ear, transforms the lick. The tune loses much of its personality and life when the details Desmond added are missing. As with any solo, take time to match the recording for all the style elements that are tough to represent on paper.

I’ve seen this solo written out a few times in books…they tend to oversimplify some of the more surprising note choices by assuming he is simply playing in thirds on most of the pseudo-arpeggios. Note that most of the shapes are based on a C-6 (concert Eb-6) chord, and a strong emphasis of the note F (concert Ab). To my ear, the F implies an F7 and a mild suspension.

My favorite moment is the phrase from measure 49 to 56. Its a nice rising sequence and it really plays of the bright color of the major 6 of the Dorian scale.