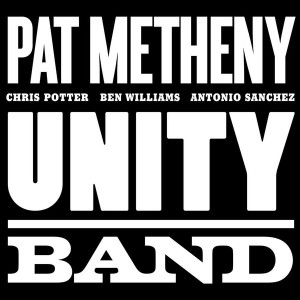 Pat Metheny has always been one of my heroes. With Michael Brecker as a saxophone hero in the 90s, you really couldn’t miss Pat, as he was on many of Brecker’s albums, and vice versa. Well, as I’m sure most of you know, we lost Michael on January 13th, 2007, breaking this duo up for good.

While Brecker will be greatly missed, it seems Metheny has found a new saxophone virtuoso to work with. This time, Chris Potter is taking the tenor chair. Needless to say, the match is fantastic. Their CD Unity Band is an explosive, dynamic and complex recording featuring Pat’s usual melodic, folk rock infused compositions and extraordinarily technical solos. To add to the weight of the album, Antonio Sanchez and Ben Williams make for a fantastic back line.

I was inspired to pick this track due to the band’s impending concert, this Saturday (the 29th) at Mesa Arts Center. It promises to be amazing. I can’t wait!

On to the transcription!

This is the first track from Unity Band, called “New Year”. It’s a latin tinged composition with twisting harmonies. After a quasi-classical rubato guitar intro by Metheny, the head enters, loosely playing off a quarter note triplet theme. Pat’s solo is surprisingly understated, probably due to the acoustic guitar, but very melodic and smooth despite the colorful harmonies.

This solo is masterclass on arpeggios. His opening lines (at D) are sweeping, unadorned outlines of the harmonies. And in the rare moments he veers away from that, he contrast them with elegant melodies and lightning fast displays of his bebop chops. Its a very refined solo, even for Chris.

This solo is probably one of the more straight ahead ones to draw ideas from. The lines are perfectly on the chords, the changes, while unusual, follow a lot of logical patterns, and many of the juiciest moments land on common sequences of chords. So instead of practice tips, I’m going to suggest you just dig in and steal to your heart’s content.

See you at the concert on Saturday!