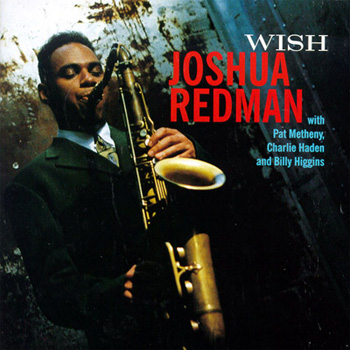 About a week ago, I posted a transcription of Ornette Coleman playing a blues of his called “Turnaround” from 1959’s Tomorrow is the Question. For the sake of comparison, I picked a solo of Joshua Redman playing the tune in his more Sonny Rollins, post-bop way. You can find this is on his 1993 record Wish. The way Redman plays it, it’s really just a conventional blues in C.

This solo is a brilliant use of motivic improvisation, or extended improvising off a simple, memorable theme. In the whole solo, Redman really only plays 2 basic ideas, and then some filler Bebop for contrast. Check out the line below:

The 1st solo Chorus C is basically all this idea being developed…a lot like the famous Sonny Rollins solo on “St. Thomas” from Saxophone Colossus. If you really look/listen, you’ll hear that minor 3rd idea show up everywhere. He even goes so far as to end the solo on it, coming right back to the very first idea he played. Basically, he sequences it through the changes with some rhythmic twists. For this motif, he almost always sticks to diatonic sequences (meaning, within the chord/scale…except notably in bar 55 & 56 where he sounds strikingly like Ornette Coleman).

After a bit of Bebop to end Chorus C, he introduces the only other major motif of his solo…a developed version of the closing 4 bars of the head.

For this idea, he usually wanders outside chromatically, just like the original melody. Check out Chorus G…he really lets it go!

Also, dig on the rhythmic playfulness in the solo. My last jazz teacher, Jerry Bergonzi, calls lines like the one in the 1st two bars of E “shifting gears”, where you literally play in a different meter, polyrhythmically over the time. Redman is implying a bar of 3/4 inside of every half note for the 1st few measures here. He gives it the feel of 8ths being played in a faster 3/4, instead of triplets in 4/4 (ergo my weird notation choice…). He takes it much further in Chorus G where he goes crazy developing the 2nd motif while shifting gears. NOTE: The notation will be tough to play with the right feel unless you check out the record, so go get the track to fully appreciate what he does here.